- July 13, 2020
Satellite images of Syria taken at night capture a subtle trace left by human civilization: lights. Apartment buildings, street lights, highways, powerplants-- all are illuminated at night and can be seen from space. Researchers often use these nighttime lights signatures to track development; as cities grow, villages recieve power, and infrastructure is built, areas emit more light. But this works both ways. As cities are demolished, villages burned, and highways cutoff, they stop emitting lights.

The timelapse below uses imagery from the Defense Meteorological Satellite Program (DMSP), a joint program run by the U.S. Department of Defense and the National Oceanographic and Atmospheric Agency. One image is taken per year between 2005 and 2013:

Some striking trends are visible. Night-time lights increase steadily between 2005 and 2008, a pattern that accelerates between 2009 and 2010. This reflects the long-term urbanization of the country. However, the most starkly visible trend is the darkness that engulfs the country after 2011. Early fighting between government and rebel forces was particularly destructive to infrastructure, largely due to Assad's proclivity for the use of barrel bombs.

There are some limitations to the timelapse above. The resolution of the (publicly available) DMSP images is relatively coarse, and the satellite was decommissioned in 2013, two years into the civil war. Furthermore, only one or two images is available per year. However, a new NOAA satellite was launched in 2011 and is still up and running. It produces images more frequently (on a monthly basis) and at a much higher resolution than its predecessor. Below is a monthly timelapse of nightlights spanning from April 2012 to December 2019.

The level of spatial and temporal detail in these images enables a close look at many of the defining moments of the war.

The Battle for Aleppo

The images below were taken between 2012 and 2014. Vast swaths of the city darken as neighbourhoods are razed by fighting.

Though this is a trend that can be observed across the country, nowhere is the decline in nightlights more visible than in Aleppo. Below is a comparison of longitudinal trends in nighlights signatures between several cities:

The most salient trend is Aleppo plummeting over the course of 2012, and becoming steadily darker over the course of the next four years. Raqqa drops in 2012 as well, but remains in flux until 2017, when the battle to reclaim the city pluges it into near total darkness. Damascus also experiences a dip in 2012, but stabilizes relatively quickly. The Turkish city of Gaziantep-- less than 100km from Aleppo and roughly 1/5th the size-- stands in stark contrast to the Syrian cities, becoming progressively brighter over the entire period.

Another interesting pattern here is the difference in seasonal trends in nightlights. Under normal circumstances in this part of the world, cities become brighter at night during the summer months. Restaurants, bars, and markets stay open later and conduct business outdoors. Gaziantep, which still attracts scores of tourists every year, displays pronounced seasonality. Damascus, the most stable of the three Syrian cities, also maintains a seasonal trend throughout the war. In contrast, both Raqqa and Aleppo maintain extremely low and roughly constant levels of nightlights year-round during the periods following intense fighting.
Reliable economic data for Syria haven't been available for nearly a decade, and assessing the country's recovery is consequently difficult. But subtle indications of economic growth are visible above: all three Syrian cities have been on a steady upward trend since 2017, and beginning to display seasonal variation once again.

Control over oil and gas fields

Throughout the war, sudden massive spikes in nightlights signatures can be observed throughout the country. In the center of the map just west of Palmyra, some particularly large spikes occur in 2017:

These flashes of light show gas wells being set on fire, a common form of sabotage carried out by retreating Islamic State fighters. Modified Sentinel-2 imagery of the Hayyan gas field (indicated by the green box above) shows this in greater detail. Substituing the Red band in an RGB image with Near Infrared (NIR) highlights thermal signatures, showing fires burning brightly even during the day.

The large complex on the right is the Hayyan Gas Plant, which produced nearly 1/3 of Syria's electricity. The plant and its associated wells changed hands several times throughout the war, but were under Islamic State control until February 2017. In the video below, Islamic State fighters can be seen rigging the plant with explosives and destroying it on January 8th:

In February, three Russian oil and gas companies (Zarubij Naft, Lukoil and Gazprom Neft) were given restoration, exploration, and production rights to the hydrocarbon deposits West of Palmyra. On January 12th, 2017, the Syrian Army's 5th Legion and Russian special forces launched a counterattack known as the "Palmyra offensive", with the aim of retaking several important hydrocarbon deposits including Hayyan.
The timing of well fires aligns closely with a detailed timeline of the campaign.The Near Infrared Sentinel-2 image below shows the layout of the Hayyan Gas Plant and the wells in the Hayyan gas field:

Interestingly, despite the massive explosion caused by the bombing of the Hayyan Gas Plant, no prolonged thermal anomalies were detected over the area of the plant itself. The well fires, on the other hand, lasted for months. Below is an image of well fire at the Hayyan field taken from this video; based on the nearby infrastructure and date (04/02/2017) of posting, it is likely Well-3. 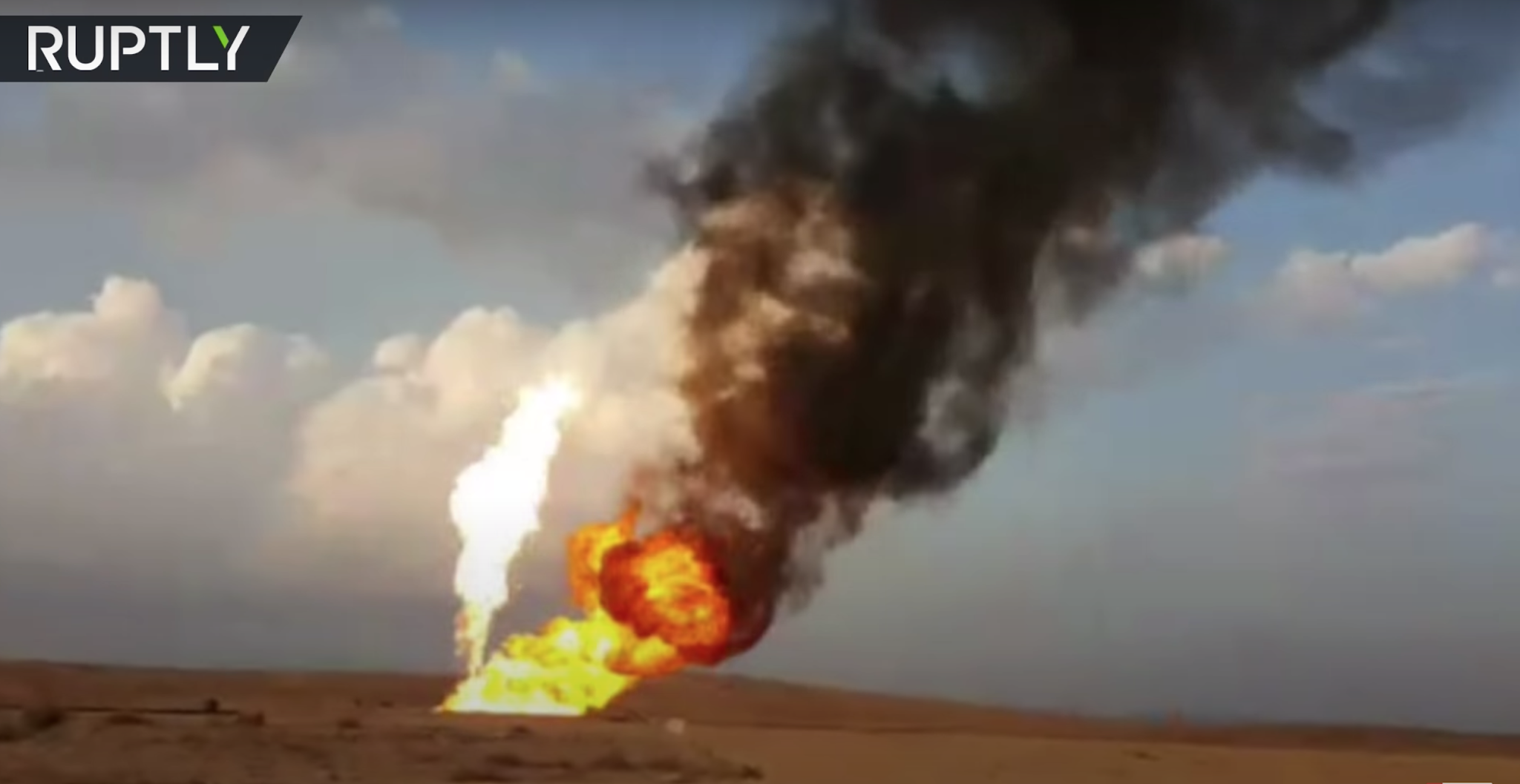 Fighting along the Euphrates

The banks of the Euphrates have been cultivated since at least 8,000 BC, making this one of the oldest continuously settled places on earth. A patchwork of agricultural settlements can be seen lighting up the outline of the river in 2012.

In 2013, Raqqa is overrun by the Al-Nusra front and the Free Syrian Army. This campaign ocurred with relatively little damage to infrastructure; though the area becomes darker between 2013 and 2016, this was the result of power outages rather than bombing. Lights can be seen slowly returning in late 2016, before completely disappearing in 2017.

The Battle of Raqqa (known as "The Great Battle" by the SDF),  began in June 2017. As previously mentioned, nighttime lights in Raqqa fluctuate while the city is unded ISIS control, but are completely erased as the battle for the city reduces it to rubble. Sentinel-2 imagery captures the extent of this destrution.

Despite having been under ISIS control for nearly four years, the city remained relatively intact until the 2017 offensive. As the Syrian Democratic Forces made their advance on the ground, they were supported by U.S. airstrikes. The grey-white patches spreading across the city show city blocks leveled by bombing, and occasionally plumes of black smoke can be seen from recent strikes. The agricultural fields in the bottom right corner show signs of activity until the bombardment begins-- during the peak of the harvest season-- after which the crops can be seen withering away. According to the UN, 80% of the city had been left "uninhabitable" by the bombing.


An interactive version of the nightlights dataset can be accessed here. It also contains monthly optical imagery from the Sentinel-2 satellite, so that trends in nightlights can be verified visually. This tool can be used to cross-validate reports of attacks, track the destruction of a city, monitor oilfields, or to investigate anomalies. It automatically fetches the latest imagery, though nightlights images are released sporradically (unlike Sentinel images, which are processed and released weekly). 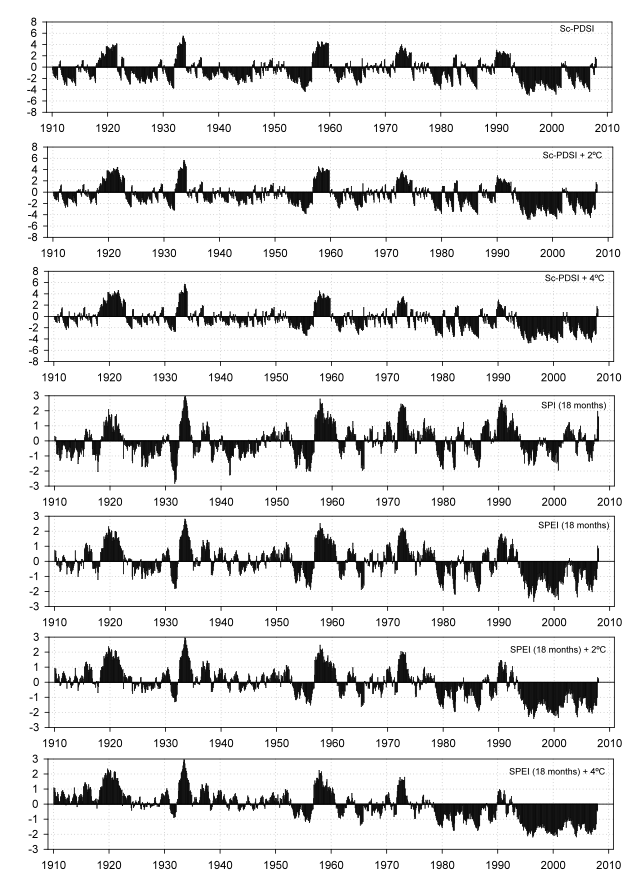